HuffPo + AOL = a deal that only adds up for Arianna 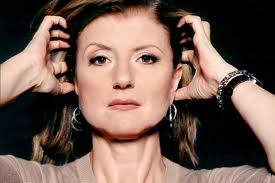 Some wit has smartly suggested that the only way you can make sense of Arianna Huffington’s bombastic claim to have created a “1+1 equals 11” deal merging The HuffPo with AOL is to translate the sum into Latin – numerals. To my mind, that’s too generous; and in any case, he’s got the language wrong. It’s all Greek.

Say what you like about Huffington, née Stassinopoulos, she knows a sucker when she meets one. No wonder she let Tim Armstrong, chief executive of AOL, uncharacteristically finish her sentences for her. She was mentally several steps ahead of him at the time, stitching up the terms of the deal. The key word is “cash”, as in $300m out of the $315m total paid for The HuffPo – all of it going to Huffington, her co-founder Kenneth Lerer and a few private investors.

You have to admire the minx’s cunning. Let’s look at what she is getting for AOL’s money. A massively generous market valuation for what is still regarded by many as an experimental and unstable publishing model; the instant access to the capital markets that comes from merging your enterprise with a public company; huge personal gratification as the newly installed president and editrix of an enlarged digital unit, bearing her name, with the potential for 100 million visitors a month in the USA alone (according to the New York Times). Then there’s the satisfaction of relegating that upstart digital publishing doyenne Tina Brown further down the Forbes Business List of Most Influential Women in America. And finally – O frabjous day! Callooh Callay! – a good part of $300m in the bank if it all goes belly up. Unlike that other upwardly mobile Greek of myth, Icarus, Huffington will never get burnt, thanks to a golden parachute. Win-Win or what?

Not so AOL. For whom, during it long and tortuous corporate history, the parts of the merger equation have always ended up being greater than the sum.

For sure, it would be unfair to compare the latest AOL get-together with what, after all, is one of the greatest merger disasters in corporate history – a merger which blighted both Time Warner’s and AOL’s fortunes for nearly a decade. Yet searching questions about whether the latest graft will take need to be asked.

All right, HuffPo (unlike Brown’s Daily Beast) makes a profit. It was $31m in 2010 and is expected to be $60m this financial year – which is not to be sniffed at. However, that profit has been earned off the back of a volunteer army of low-paid bloggers, who may not be too chuffed that they nowhere figure in the $315m picture. More seriously, content farms – of which HuffPo is perhaps the most illustrious example – are an unproven publishing model.

True, they are very popular with Wall Street just now. Demand Media, for example, managed to get away with an IPO that valued the company at a staggering $1.5bn late last month. But trouble may be on the way for Demand, and those who base their publishing model on a similar template. Google, vital for driving traffic to these sites, has declared war on them. Here’s what the great search engine had to say only a few days ago on the subject:

… we’re evaluating multiple changes that should help drive spam [search results, not email] levels even lower, including one change that primarily affects sites that copy others’ content and sites with low levels of original content.

… we hear the feedback from the web loud and clear: people are asking for even stronger action on content farms and sites that consist primarily of spammy or low-quality content.

I quote from the blog of Jim Edwards, who is something of an authority on the subject of content farms (– yet to grace our shores). The important point is that if Google successfully carries out its threat, billions of advertising dollars may simply disappear from these sites.

And where would HuffPo – or for that matter, Tim Armstrong and AOL – be then?

UPDATE 13/4/11: As predicted above, HuffPo bloggers have not taken La Huffington’s $300m cash heist lying down. She, her website and AOL face a $105m lawsuit from a group of contributors angry that they have not been paid a penny in the wake of the deal. The class action is led by one Jonathan Tasini, a writer and trade unionist, who has a successful litigation track-record. A decade ago, he brought the New York Times to its knees in the Supreme Court. Tasini alleges: “Huffington bloggers have essentially been turned into modern day slaves on Arianna Huffington’s plantation,” a colourful description of the economic principle underlying modern-day content farming.

Now the geographical focus has switched from one end of France to the other: Waterloo. Not only has an ambitious foray into the real-time web, involving interactive video, gone into meltdown, but some embarrassing sales figures have emerged. It’s tempting to believe the two things are connected, though that’s doubtful.

“The man your man could smell like”, devised by Wieden & Kennedy, has been an undeniable succès d’estime, but it doesn’t sell product. Not, at least, if we give credence to the SymphonyIRI figures printed in Brandweek: during the 52 weeks ending on June 13, sales of the brand have dropped 7% (excluding the amount sold in WalMart). Bear in mind that the W+K campaign was launched at the Super Bowl in February, so it’s had plenty of time to register a difference.

Taken at face value, this is yet another example of a hackneyed and disagreeable truth. Great creativity may surprise and delight, but often fails to sell product. As Jim Edwards at bNet points out, that’s a great shame because it sets the cause back. Once, P&G was lambasted for its controlling and philistine attitude towards creativity. Now it has changed its ways, it’s probably going to be pilloried for not slashing the price and turning the brand into a moribund cash cow. Or something equally unimaginative. Is Old Spice a dad’s brand, beyond redemption? I don’t know. But it’s certainly possible the marcoms is too sophisticated for the task in hand.

To use a rare (for me) sport analogy, would Germany have won the World Cup had it stuck to its usual, brutally regimented, style instead of adopting the free-flowing, elegant, possession football identified as “gay” by its critics? At the end of the day, it’s all about scoring goals.

UPDATE 27/7/10. Have I been too harsh on the Old Spice Guy’s performance? New sales figures, produced below and printed in Ad Age, suggest a more complex picture than that originally conveyed by the Brandweek article. At first sight, Old Spice seems to have done well, especially in June. On closer inspection, however, P&G’s Gillette has done a lot better. The real winner in the period is probably Unilever’s Dove Men & Care, relaunched in the spring. As Ad Age points out, category uplift has been complicated by heavy couponing and price discounts. Whatever else they may be, the sales figures are not a clear-cut endorsement for Old Spice creativity: 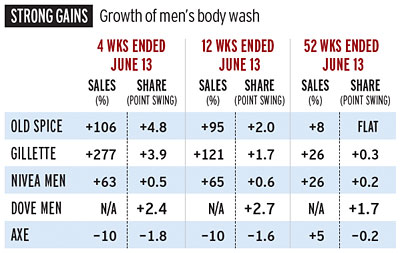