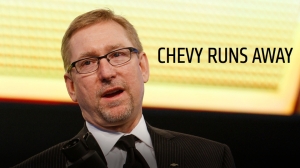 “He failed to meet the expectations that the company has for its employees,” said General Motors spokesman Greg Martin cryptically. That looks like being GM global marketing supremo Joel Ewanick’s epitaph. The marketing whirligig quit abruptly last weekend, after two years at the steering wheel of one of the world’s biggest car companies.

But just what did Martin mean by failed expectations? It appears that Ewanick fell down badly on the small print in the 5-year sponsorship deal he signed with Manchester United. Details remain sketchy, although they will undoubtedly emerge over time. Some financial liability is likely involved should GM fail to deliver on its side of the bargain; this seems to be what Ewanick ‘forgot’ to disclose to his superiors.

GM may be glad to see the back of him, but we hacks will miss Ewanick – with his uncanny ability to manufacture a headline. Here is the man who said ‘No’ to extortionate prime-time Super Bowl advertising; and put two-fingers up to Facebook – commercially speaking – just before it foundered in a very rocky public flotation. The Manchester United sponsorship was to be his masterly counter-coup: Ewanick bringing in the vibrant Old World (China and emerging markets included) to redress a marketing overspend in the tired old New.

Alas, attention to detail seems foreign to Ewanick’s nature. Now we shall never really know whether he was a marketing visionary with a bold grasp of the Big Picture, or simply a publicity-hungry megalomaniac revelling in world-renown.

What matters from here on in is the unpicking of Ewanick’s legacy. Hundreds of millions of dollars of revenue are at stake for the agencies that signed up to the Ewanick dream. Doubtless their lawyers are already assessing the strength of the contracts they co-signed with him. What now for Carat’s tenure of the $3bn global media account? And for Commonwealth, the complex advertising vehicle set up so that Goodby Silverstein and McCann Erickson could jointly service most of the global Chevy creative account? The holding companies of all three agencies – Aegis Group, Omnicom and Interpublic – have already made substantial investments in staffing up in and around Detroit to service the newly streamlined accounts.

Advertising relationships in the auto-industry have traditionally been very personality-driven. Despite a thick coating of metrics-speak in all their public utterances, this has been transcendentally true of Ewanick and his advertising coterie.

Goodby looks particularly vulnerable, given the close personal relationship between Ewanick and Goodby founder Jeff Goodby – who shared the stage at this year’s Cannes International Festival of Creativity.

All eyes will now be on Ewanick’s (at least temporary) successor, Alan Batey, head of US sales and service.

Little is known of him other than that he was once a car mechanic. But of one thing you can be certain. Agencies, on and off the GM roster, will be doing their damnedest to find out more. Just in case.

UPDATE 31/7/12: The problem with the Manchester United shirt sponsorship deal is that Ewanick paid too much, it has emerged. He committed to a 7-year deal at £25m ($39m) a year without disclosing how “full” the terms were to GM’s board. $300m represents a premium of 25% to what the current sponsor, AON, is paying – and is a lot more than Ewanick seems to have implied to his colleagues during negotiation.