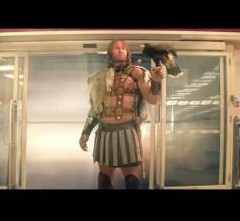 If it weren’t for the fact David Cameron watches so little television, I would be forced to conclude he has been modelling his recent behaviour on Borg, the Viking Himbo now fronting Tesco’s advertising.

How else explain his assault on multinational brands in recent days – which has all the subtlety of Thor laying about him with his hammer after a particularly drunken binge?

Last week, it was Coca-Cola that got stomped all over, when Cameron told the House of Commons that he regarded it as his solemn paternal duty to prevent his children consuming “excessive” amounts of the sugary beverage.

This week he was at it again, telling the World Economic Forum in Davos that brands which avoided paying their fair share of corporation tax needed “to wake up and smell the coffee” – an unvarnished reference to Starbucks and those other egregious “tax dodgers” Amazon, eBay, Facebook, Google (and, er, Coca-Cola). And the tirade didn’t end there: so sick and tired is the British public of the multinationals’ fiscal chicanery that Cameron has decided to make clamping down on corporate tax-avoidance a central plank of our G8 Group presidency later this year.

Whoa, Dave. Is this your idea of a soft close? Britain shut for business before you oblige us to pull out of the EU?

Spotted in conversations at Davos: Levy and Roth

No doubt Publicis Groupe chief Maurice Levy and head of Interpublic Michael Roth were discussing snow conditions, or the iniquitous constraints about to be imposed on capital markets by the Volcker Rule. Or were they…? See below.

One thing that may have popped into the conversation is why IPG just got so close to busting its debt covenants that it felt it had to amend them on more generous terms. In plain language that means IPG probably won’t make its earnings forecast (bad news for the share price). IPG claims it’s just a “precaution”; but the trailing share price since the announcement says otherwise: analysts don’t believe the sweet talk. Good news for any predator, though…