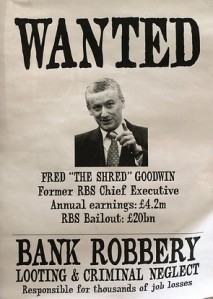 Which brands make us most angry? Yes, you guessed correctly. The big ones that rip us off, starve us of mortgage funds, pilfer our savings and behave with amoral disregard for everyone’s interest but their own. Anything, in short, that ends with the word “Bank”.

But come, let’s be a bit more specific. How about some brand differentiation – which is the worst, and which the runner-up? Well, coming in at number 2 – just behind the winning “All banks” category – is Barclays. And next, in 7th position, is Royal Bank of Scotland.

I know all of this thanks to some research, just out, conducted by YouGov and commissioned by creative agency Johnny Fearless (of which more below).

Why don’t Lloyds, Santander and HSBC make it into the top 10? Surely not on account of the odour of sanctity. We can only speculate, but could it be that Barclays and RBS have the two biggest Swinging Dicks attached to their brand heritage, namely Bob Diamond and Fred the Shred? I doubt that most people know who Antonio Horta-Osario is, and would struggle to recall his name in sufficient detail if they did. Which is probably just as well for Horta-Osario and Lloyds Bank.

More interesting, if perplexing in some ways, is the identity of the other 7 members of this exclusive Top 10 club. Tenth equal with Coca-Cola is Nestlé – still regarded as a corporate pariah on account of its anti-social baby-milk marketing practices in developing countries. I’m sure that doesn’t depress sales of Kit-Kats and Yorkie bars one bit, though.

And what’s Coke doing in there? Sorry boys and girls, for all your tender investment in clean athleticism, those grubby practices in Third World countries have not gone unnoticed.

Next up, “All utilities companies” at number 8, on account of their high prices and perceived profiteering. But two deserving special mentions here are British Gas – with its conspicuously bad customer service; and BT – with its ineffectual overseas call centres.

Virgin Media is in there at number 8 as well, although I have yet to discover whether this is because we’re all being beastly to Beardie or on account of some graver underlying cause – such as woefully inadequate service.

That leaves us with McDonald’s at number 4 – poor quality food and an inappropriate Olympics sponsorship, apparently.

…And, weighing in at number 3, the nation’s unfavourite retailer – Tesco. Memo to Tesco CEO Phil Clarke: it’s because you’re too big for your boots, despoil our high streets and blackmail your suppliers. No other retailer can do this so successfully, it seems.

The research was commissioned by Johnny Fearless and carried out by YouGov. Total sample size was 2077 adults. Fieldwork was undertaken between August 3-6th 2012. The figures have been weighted and are representative of all UK adults (aged 18+).

Johnny Fearless is a Soho start-up agency founded by Paul Domenet and Neil Hughston, whose stock in trade is creating “social crackle” around brand messages. Or so it says in their publicity blurb.

Why energy companies continue to give marketing a bad name

News that 4 of the Big 6 UK energy companies are, yet again, to be investigated for mis-selling their products to customers should surprise no one.  This is only the latest episode in a sorry saga that goes back to the dawn of energy market deregulation, and in which the regulatory regime itself has played an unedifying part.

First, though, the latest facts. The energy watchdog Ofgem has called upon Npower, Scottish Power, Scottish and Southern Energy and EDF Energy to give an account of themselves over alleged malpractice by sales agents drawing up contracts, whether face to face with customers or on the phone. For now, British Gas and E.ON, the other big operators, are not involved, but Ofgem has not excluded the possibility of investigating them at a later date.

Research by the regulator in 2008 found that more than half of those who switched their energy contract did so after direct contact with a company salesman. It also  found that many consumers ended up paying more for their tariff as a result, either because they were explicitly misled, or because it was hard to make a specific comparison between the old and the new bills. New regulation was brought in at the end of last year which tightens up the sales process. It compels the energy companies: to supply a customer with an estimate before any face-to-face sale is concluded; to give a meaningful comparison between the new offer and the current deal; and to actively prevent deliberate mis-selling to customers. The stakes are high. If the companies are found guilty of breaching these rules, theoretically they can be fined up to 10% of their turnover. In 2008, Ofgem fined Npower £1.8m. In 2002, London Electricity – now part of EDF – was fined £2m.

For all that, the regulator is clearly unhappy with the efficient working of the new tougher regime, 7 months in. Sarah Harrison, Ofgem’s head of corporate affairs, has characterised the problem as one of making sales people operate “in an honest and truthful way”. That’s certainly a prerequisite to solving it, but barely does justice to its cancerous complexity.

In truth, this is not simply a sales but a marketing issue. It goes to the heart of the permissive business culture in which the energy companies feel they are entitled to operate. Behind the glossy façade of, say, EDF’s pledge to make the planet greener or Npower’s sponsorship of the Football League, is the grubby reality of a low-margin business, largely devoid of innovation, where the only way to make shareholders happy is constant customer churn. Churn, and therefore intensified sales activity, becomes particularly attractive whenever wholesale energy prices rise – as they have a tendency to thanks to the so-called commodity supercycle. The act of disguising, or smoothing, the inevitable retail price hike is an unmissable opportunity for the energy companies to steal share from their competitors through such marketing expedients as discount- and fixed-price schemes. These are very often difficult to compare forensically.

The problem goes back to the origins of market deregulation. Such was the desperation of John Major’s administration to create genuine free-market competition in place of British Gas’ quasi-monopoly (on the gas if not the electricity side of the equation) that it was prepared to condone a regulation “lite” environment conducive to new players picking up share as quickly as possible. Unfortunately, once the new free market was established, subsequent governments did not intervene swiftly enough to tighten down the screws.

Unscrupulous door-step selling soon became the stuff of tabloid headlines. The reality was slightly more complex. Poorly trained and dishonest salesmen were only part of a wider phenomenon: confusion marketing, which sought to bamboozle the consumer with unrealistic price comparisons and special offers that weren’t, in the event, at all special. Whenever the regulator has periodically cracked down on these practices – usually after a media outcry – the standard response of the energy companies has been to admit responsibility but to distance themselves from the blame by making “a few dishonest” salesmen the scapegoat. At no time, it seems, has the finger of blame been pointed at the boardroom for condoning a culture of institutional dishonesty.

Why have the energy companies not rectified the faults in their customer service earlier? Because they don’t have to. In other sectors – let’s take the supermarkets as an example – such behaviour would be unthinkable. Exposure would immediately lead to lasting brand damage. But the utilities are different. They inhabit a sector where expectations of good behaviour are low to start with and where the usual reaction to customer abuse is a shrug of the shoulders and a weary comment to the effect that they are all as bad as each other.

An initially invertebrate regulatory culture has contributed to this complacency. Only latterly, now that fines can hit shareholders (and therefore the board) where it really hurts – in their dividends – are practices beginning to change for the better. But that change – as the present investigation by Ofgem shows – is glacially slow in making itself felt. The fines, when they come, need to be a lot more severe.