BBC in uproar and not a Twitter from @rupertmurdoch 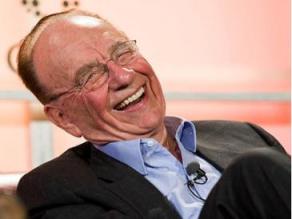 Considering the gloating opportunities, @rupertmurdoch has been abnormally restrained. Apart from a terse but prescient: “Saville (sic)- BBC story long way to run. BBC far the biggest, most powerful organization in UK,” nothing has been said on the subject since October 14th.

Maybe the old boy has got bored with his favourite hobby, the British media. But I somehow doubt it. And his silence certainly can’t be attributed to not wanting to stick the knife in – as Hugh Grant, the “Scumbag Celebrity”, knows to his cost. No, @rupertmurdoch is surely waiting until the dish is sufficiently cold to make a mouthful of it.

And what a mouthful. The BBC has rightly made much of the fact that Savilegate (all crises these days are “-gates”, aren’t they?) has a silver lining. No other news organisation, they say, would be capable of an equivalently rigorous self-examination in the wake of such an error. “Mea culpa” is not, after all, a term you hear very often at News International – or anywhere else, for that matter, unless the lawyers so decree. But the BBC being more transparent is no guarantee that its senior executives are any less mendacious, self-serving and slippery than those of other media owners.

Today’s performance before the culture media and sport select committee by a nervous George Entwistle, now director-general, then director of vision (i.e. telly), left us in little doubt that Newsnight’s editor Peter Rippon is the one being lined up for the sacrificial knife. And it’s his blog what done it.

True, Rippon’s version of the facts leaves much to be desired. There are a number of errors in the post which make it apparent that, even looked at in the most charitable light, Rippon’s grasp of the situation was woefully inadequate. The point about not withholding information from the police, for instance, is downright misleading (whether deliberately so or not). That’s certainly conduct unbecoming in the editor of a programme of Newsnight’s calibre.

But all this proves very little, except that Rippon was desperate for some ex-post facto sticking plaster to justify a decision that he himself may have found incompatible with his professional ethics. The question is: how did he arrive at that decision? Hard evidence has yet to surface, but circumstantially there seem a number of things that just don’t add up. At one moment, Rippon is reported by the Newsnight editorial team to be upbeat about the Savile programme’s prospects; the next, he has decided to shelve it. Apparently, this happened very soon after he had informed the BBC’s head of news, Helen Boaden, of the programme’s content and intention. Boaden then told her boss, Entwistle. But, according to him, only in the most airy, abstract manner. With the result that this normally competent media professional entirely failed to recognise the Newsnight investigation might in, some way, undermine a lavish tribute programme shortly to be aired in Sir Jimmy’s honour – and make complete fools of the Corporation’s senior executives at the same time. That at least is what he is asking us to believe, since he clearly took no action to review the tribute programme.

Rippon, of course, is denying that Boaden gave him any advice beyond telling him to act according to his own lights. Whether that advice included a knowing wink and a nod, alluding to his future on the BBC career ladder, we shall probably never know. Boaden’s words are unrecorded, and she shows no sign of wishing to enlighten us further.

That said, maybe we should keep this affair in perspective. BBC executives may be dealing in half-truths and obfuscation, but they can hardly be accused of breaking the law. Unlike Trinity Mirror, publisher of the Daily Mirror, Sunday Mirror and The People, which is now facing civil actions over phone-hacking from former England manager Sven-Goran Eriksson and a number of other minor celebrities. Trinity Mirror’s senior management is, as it has routinely done since questions started to be voiced about Piers Morgan’s tenure as editor of The Mirror, denying any wrongdoing. But shareholders obviously don’t believe them. At one point, TMG shares dipped 12.5% today. Civil actions were the slow-burning fuse that eventually lit the powder-keg at News International.

As I say, the old boy is going to have a right old feast, once he gets round to serving it.

This entry was posted on Tuesday, October 23rd, 2012 at 4:39 pm and is filed under Issues, Legal, Media. You can follow any responses to this entry through the RSS 2.0 feed. You can leave a response, or trackback from your own site.